It’s been a week of magic moments.

So magical that I discovered a very special young poet – Daniel age 7 and a half. The half is very important you know!

I read his poem on Twitter about ten days ago. Not any sort of poem, but a ‘special’ poem by a very special little boy. It’s not often you come across children who are willing to tell you their problems, or what’s bothering them. But, I was bothered by Daniel’s botherdness to write this poem. 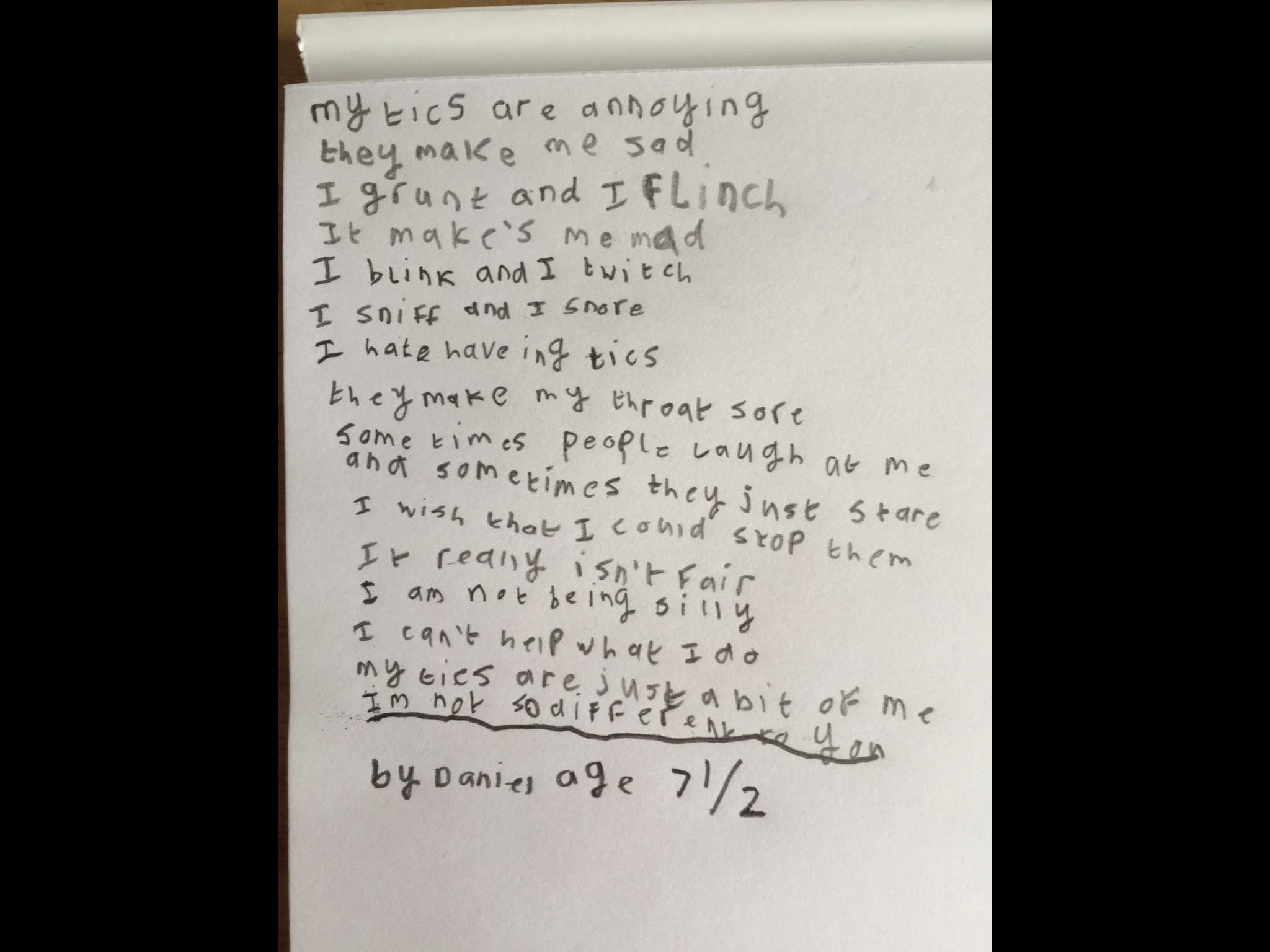 I was blown away by his honesty, telling us in a poem how it makes him feel and how he can’t help it. My absolute favourite bit are the last two lines. Yes, Daniel is right, his tics are a bit of him and he’s not so different to any of us, because we all have our own special ingredients. Whether you like them or not, it’s those ingredients that make us all unique. We can’t all love everything and everyone, but what we can do is recognise our own special ingredients, even if they are not nice to us at times.

You see, I’ve been on a mission for a while since writing my latest book ‘Of Teaching, Learning & Sherbet Lemons’ to discover ‘extra special’ individuals, those individuals who have ‘Fizz’.  For me, Daniel is one of those.

Thanks to @Oldprimaryhead1 on Twitter, I managed to get and address for his Headteacher and sent Daniel a parcel and a mission. I was hoping in anticipation he would respond. He did via his Headteacher, Ms V Dupras, Castle Batch Community Primary School.

Here is the letter and parcel I sent to Daniel to encourage him to continue writing some more poems. 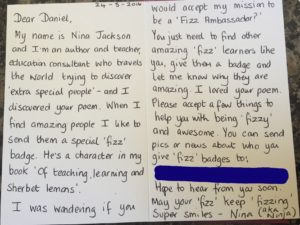 Card I sent to Daniel 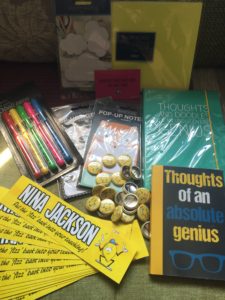 Gifts to support Daniel with his writing.

This is where the story gets even more exciting.

Firstly, I received a wonderful email from Ms Dupras, Daniel’s headteacher who said he had received the parcel and she had delivered it to him personally in from of his class. That must have been an exciting moment.

Later that evening I received an email from Daniel’s mum – Martine.

I accept your mission to be a fizz ambassador, thank you very much for all the things you sent me. I love the pens, bookmarks, books & badges. I’m glad you liked my poem & thank you for writing to me. Love from Daniel X

(The above are Daniels words!!)

Thank you so so much for the card & gifts you sent Daniel, he is so over the moon & I, his mum, am totally overwhelmed by your kindness.

You’ve made a little boy, with very low self esteem so very happy! He is clutching the card you wrote him as I type & everything you sent him is on his ‘special table’ with his other favourite things!!

Thank you so much again,

How fantastic is that! He now had his gifts on his ‘special table’ with his other favourite things. I couldn’t ask for more, I was honoured….but there was more. With permission of Daniel’s mum here he is with his gifts. 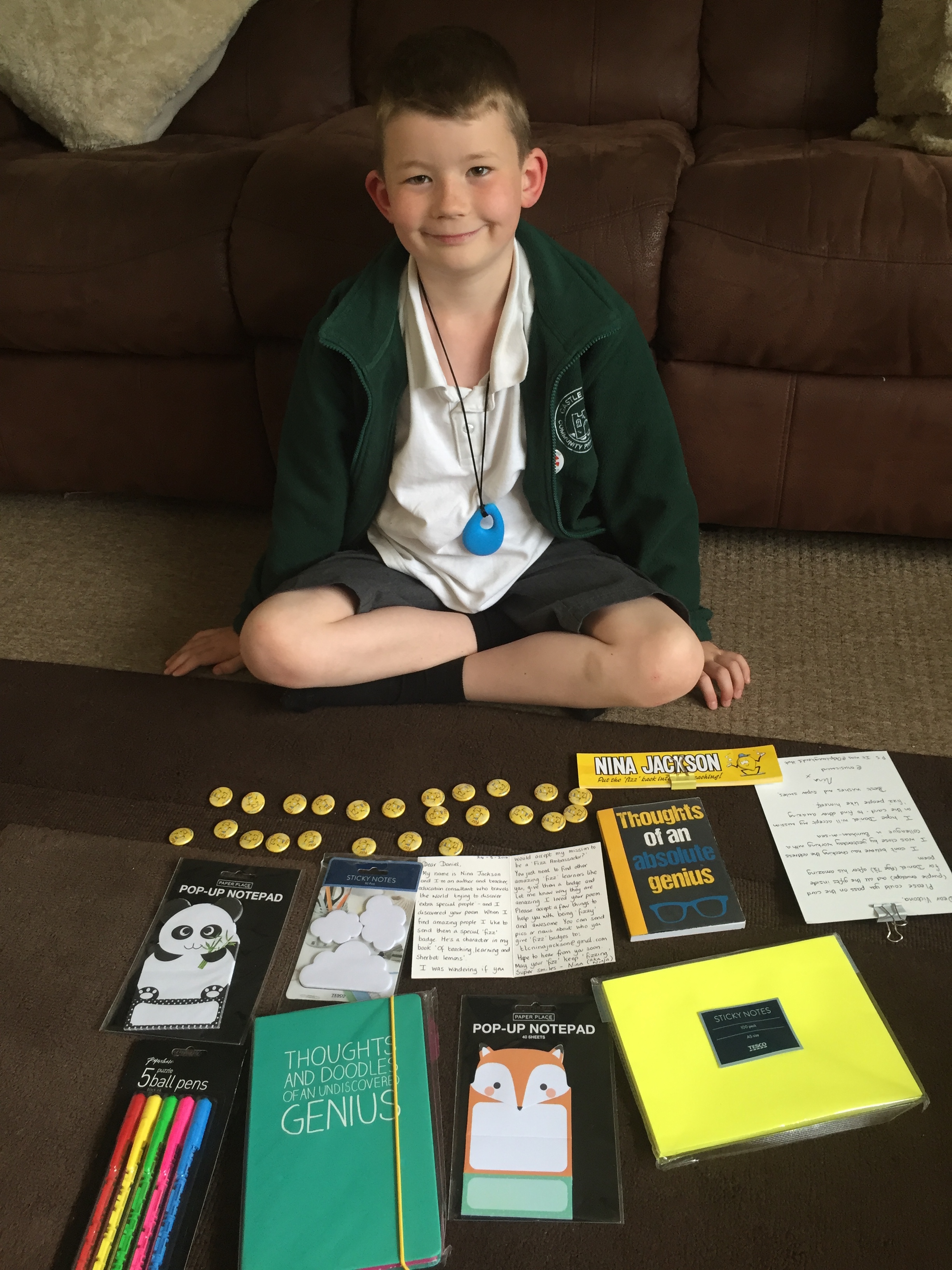 Since this picture was sent much more has happened to. I asked permission from Daniel’s mum Martine to write this blog. She responded with:

Thank you for your email, nice to hear from you, Daniel’s response was “cool, yes please”!

I don’t mind at all if you use our names & photos. We would love to read the blog, Daniel’s always asking me to read out the comments people have written about his poem. It’s gone global on the Tourette’s awareness pages in America & UK on Facebook – we’re both so shocked & maybe just maybe it will make people think before mocking anyone with Tourette’s. I don’t think Daniel’s really aware though, of how many have seen his poem!  He just wants David Walliams to read it!! He he.

Oh & he wants to be called ‘fizzy Daniel’, he loves the books & badges you sent him so much!

Take care, speak to you soon,

So, I set to work and wanted to put the icing on the cake for Daniel. To get David Walliams to read Daniel’s poem. So, with the power of social media, in particular Twitter I sent several tweets to @davidwalliams hoping he would respond and read Daniel’s poem.

I dashed to the computer, emailed his mum and his Headteacher. Ms Dupras responded within minutes of my report with this:

“I just went and let Daniel know. His classmates all said “wow!” and burst into spontaneous applause!”

If that isn’t something to help a little boy with Tourettes who wrote a poem to tell us his problems, then I’m not sure what else would we could do.

I think it’s me that now needs to thank Daniel as he’s given me so much joy this week I have finally found my first ‘Fizz Ambassador’.

Even this made my day:

Daniel was so pleased last night! He googled your photo & made a ‘mii’ character of you on his ds! He he.

He’s been creating a picture for you this morning as he wants ‘fizz’ to have a friend.

Thanks again Nina, have a lovely weekend.

I’ve finally made it into a DS…thank you Daniel. And, as you know the Ninja loves to move in mysterious ways.

So, next time you come across a very special learner in your class and you think they could be an amazing ‘Fizz Ambassador’ do let me know.

To Daniel, his mum, his headteacher and to David Walliams, thanks for making my week a total blast of motivation and smiles.

I will savour these magic moments forever and I hope Daniel will to.